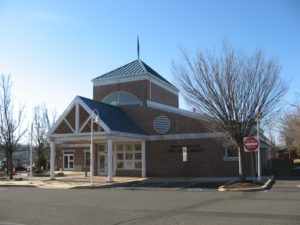 The mission of the Upper Moreland Free Public Library (UMFPL) is to consistently improve access to diverse information, advocate for life-long learning, and promote cultural enrichment, in a fiscally responsible manner.

As a community resource, the library will exceed the informational, recreational, social, cultural, and learning needs of all residents, and become an integral part of the everyday routine of the community.

An oral history of Upper Moreland Township indicated there were two early attempts at forming a local lending library. The first library may have been a little building next to a grocery store at the corner of Cherry Street and Moreland Road. In 1928, the Willow Grove Civic Club established a lending library that is believed to have been in a store across Davisville Road from the Willow Grove train station. This library closed in 1934 because of economic conditions.

The Upper Moreland Free Public Library traces its formation back to 1956 when a group of interested parents at the North Willow Grove Elementary School recognized a need for a library in their rapidly growing community. After a great deal of hard work, six families rented a basement store on Old York Road in February 1959. Volunteers scrubbed the building and the community donated books. In March 1959, the Montgomery County Court of Common Pleas issued a charter that established the Library as a non-profit corporation. On April 25, 1959, the Library opened its doors with 2500 cataloged books. Two hundred residents registered for Library cards the first day.

The Library continued to grow and soon a new building was leased from the Township. Local residents again cleaned, painted, and built shelves. The Library reopened in a house at 109 Park Avenue. By then, there were 2000 members and 7000 books. In the 1960 election, the community voted tax support for the Library. The Library moved again so that the new Township building could be constructed and the library was later relocated to the basement of the new Township building.

As Upper Moreland Township grew, so did the collection and services of the Library. Extensive investigation determined that a larger building was needed. After several years of planning and anticipation, a larger, brighter, fully computerized Library opened its doors in March 1997. The new red brick building is located at 109 Park Avenue, across the driveway from the Upper Moreland Township Building.

Today, the Library is a member of MCLINC (the Montgomery County Library and Information Network Consortium), which provides the Library with a circulation program, an On-Line Catalog, and Internet access. The Library’s collection of more than 75,000 items is augmented by the sharing of resources with the 29 other libraries. More than 2,000 items are loaned to other libraries or received by this Library for its patrons every month. In 2006, wireless Internet access was added, as were downloadable books. More than 30 databases are available at the Library or from home.

The Library is open 62 hours a week, and there is always a trained staff member to assist the patrons.