UMFPL’s Book Discussion Group is on Zoom! Join us!

This event is free & open to all adults.

Click below to receive an email with discussion points and Zoom details each month.

Click here to add your email! (No need to sign-up each month, we’ll keep you on our list until you tell us to take you off. Annually, we will check in to confirm you want to keep receiving the info!)

The Vanishing Half: A Novel

The Vignes twin sisters will always be identical. But after growing up together in a small, southern black community and running away at age sixteen, it’s not just the shape of their daily lives that is different as adults, it’s everything: their families, their communities, their racial identities. Many years later, one sister lives with her black daughter in the same southern town she once tried to escape. The other secretly passes for white, and her white husband knows nothing of her past. Still, even separated by so many miles and just as many lies, the fates of the twins remain intertwined. What will happen to the next generation, when their own daughters’ storylines intersect? Weaving together multiple strands and generations of this family, from the Deep South to California, from the 1950s to the 1990s, Brit Bennett produces a story that is at once a riveting, emotional family story and a brilliant exploration of the American history of passing.

H is For Hawk

The instant New York Times bestseller and award-winning sensation, Helen Macdonald’s story of adopting and raising one of nature’s most vicious predators has soared into the hearts of millions of readers worldwide. Fierce and feral, her goshawk Mabel’s temperament mirrors Helen’s own state of grief after her father’s death, and together raptor and human “discover the pain and beauty of being alive” (People). H Is for Hawk is a genre-defying debut from one of our most unique and transcendent voices.

The Age of Miracles: A Novel

Spellbinding, haunting, The Age of Miracles is a beautiful novel of catastrophe and survival, growth and change, the story of Julia and her family as they struggle to live in an extraordinary time. On an ordinary Saturday, Julia awakes to discover that something has happened to the rotation of the earth. The days and nights are growing longer and longer, gravity is affected, the birds, the tides, human behavior and cosmic rhythms are thrown into disarray. In a world of danger and loss, Julia faces surprising developments in herself, and her personal world—divisions widening between her parents, strange behavior by Hannah and other friends, the vulnerability of first love, a sense of isolation, and a rebellious new strength. With crystalline prose and the indelible magic of a born storyteller, Karen Thompson Walker gives us a breathtaking story of people finding ways to go on, in an ever-evolving world.

People of the Book

Inspired by a true story, People of the Book is a novel of sweeping historical grandeur and intimate emotional intensity by an acclaimed and beloved author. Called “a tour de force” by the San Francisco Chronicle, this ambitious, electrifying work traces the harrowing journey of the famed Sarajevo Haggadah, a beautifully illuminated Hebrew manuscript created in fifteenth-century Spain. When it falls to Hanna Heath, an Australian rare-book expert, to conserve this priceless work, the series of tiny artifacts she discovers in its ancient binding—an insect wing fragment, wine stains, salt crystals, a white hair—only begin to unlock its deep mysteries and unexpectedly plunges Hanna into the intrigues of fine art forgers and ultranationalist fanatics.

On an island off the coast of Ireland, guests gather to celebrate two people joining their lives together as one. The groom: handsome and charming, a rising television star. The bride: smart and ambitious, a magazine publisher. It’s a wedding for a magazine, or for a celebrity: the designer dress, the remote location, the luxe party favors, the boutique whiskey. The cell phone service may be spotty and the waves may be rough, but every detail has been expertly planned and will be expertly executed. But perfection is for plans, and people are all too human. As the champagne is popped and the festivities begin, resentments and petty jealousies begin to mingle with the reminiscences and well wishes. The groomsmen begin the drinking game from their school days. The bridesmaid not-so-accidentally ruins her dress. The bride’s oldest (male) friend gives an uncomfortably caring toast. And then someone turns up dead. Who didn’t wish the happy couple well? And perhaps more important, why?

Killers of the Flower Moon: The Osage Murders and the Birth of the FBI

In the 1920s, the richest people per capita in the world were members of the Osage Indian nation in Oklahoma. After oil was discovered beneath their land, they rode in chauffeured automobiles, built mansions, and sent their children to study in Europe. Then, one by one, the Osage began to be killed off. The family of an Osage woman, Mollie Burkhart, became a prime target. Her relatives were shot and poisoned. And it was just the beginning, as more and more members of the tribe began to die under mysterious circumstances. In this last remnant of the Wild West—where oilmen like J. P. Getty made their fortunes and where desperadoes like Al Spencer, the “Phantom Terror,” roamed—many of those who dared to investigate the killings were themselves murdered. As the death toll climbed to more than twenty-four, the FBI took up the case. It was one of the organization’s first major homicide investigations and the bureau badly bungled the case. In desperation, the young director, J. Edgar Hoover, turned to a former Texas Ranger named Tom White to unravel the mystery. White put together an undercover team, including one of the only American Indian agents in the bureau. The agents infiltrated the region, struggling to adopt the latest techniques of detection.  Together with the Osage they began to expose one of the most chilling conspiracies in American history.

Whistling Past the Graveyard

In the summer of 1963, nine-year-old Starla Claudelle runs away from her strict grandmother’s Mississippi home. Starla’s destination is Nashville, where her mother went to become a famous singer, abandoning Starla when she was three. Walking a lonely country road, Starla accepts a ride from Eula, a black woman traveling alone with a white baby. Now, on the road trip that will change her life forever, Starla sees for the first time life as it really is—as she reaches for a dream of how it could one day be. 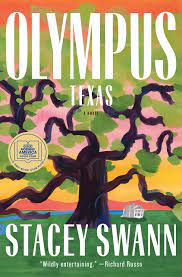 The Briscoe family is once again the talk of their small town when March returns to East Texas two years after he was caught having an affair with his brother’s wife. His mother, June, hardly welcomes him back with open arms. Her husband’s own past affairs have made her tired of being the long-suffering spouse. Is it, perhaps, time for a change? Within days of March’s arrival, someone is dead, marriages are upended, and even the strongest of alliances are shattered. In the end, the ties that hold them together might be exactly what drag them all down. An expansive tour de force, Olympus, Texas cleverly weaves elements of classical mythology into a thoroughly modern family saga, rich in drama and psychological complexity. After all, at some point, don’t we all wonder: What good is this destructive force we call love?